Triangle tattoos may seem simple but they are truly amazing. One cannot help but be inspired to learn about the communal belief systems that have led to the formation of varied triangle tattoos. Let us look at the symbolic interpretations of the different structural variations of the tattoos across different spheres of human lives.

As a Gesture of Faith

In Christian cultures, a triangle tattoo is a signifier of an identity marker of faith. The three junctions of a triangle symbolize the Holy Trinity: the Father, Son, and the Holy Spirit. Additionally, the incorporation of triangle designs in the “Eye of Providence” tattoo comes from an adherence to the Christian belief system that God is keeping people under close surveillance at every point in their lives.

The Jewish version of the tattoo, on the other hand, signifies the Shield of David. It is indicative of David’s reliable protection of his disciples from all six sides: north, south, east, west, up and down.

The Triangle in Other Cultures 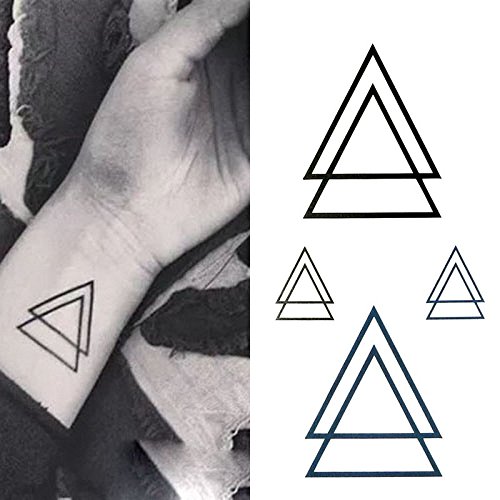 Greeks associate a triangle with the concept of a key that can unlatch doors of profound wisdom. Specifically, the interconnecting of thoughts and emotion via a triangle paves the way for seeking higher intellect. The Celtic version of the triangle tattoo, known as the Spiral of Life, denotes the Celestial and Mortal aspects of life. Moreover, it represents the afterlife as well. According to the Celts, the three interlocking spirals of the design are highly symbolic of a quest in search of unlocking full capability of spiritual enlightenment/wisdom. The Viking edition of the triangular design, referred to as the Viking Valknut, symbolizes the divine passage of human soul and/or body from the material world to the afterlife. According to Nordic mythology, the Viking combatants used to bear the Viking Valknut in the hope of earning the privilege of safe passage of their bodies to Valhalla, the paradise of the Vikings.

Meaning According to Structural Orientations