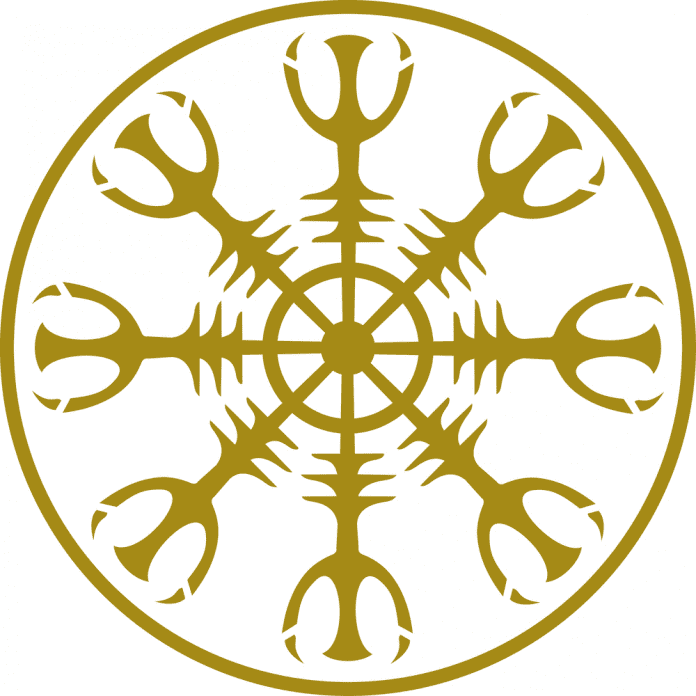 Runes are the communication system that the Vikings used to worship and talk with the Norse pantheon. Ever since those days they’ve been used as tattoos and valued for both their aesthetic beauty as well as their spiritual significance. According to some scholars, the Vikings used to tattoo their body from fingernails to the neck. Norwegian rune tattoos originate with Viking tattoos as the Vikings ruled Norway for 250 years. During this period the Vikings influenced many aspects of Norwegian culture, including the inscription of tattoos. There are numerous runic tattoos which symbolize many things. Let’s take a look at several of them.

The Aegishjalmur charm is also known as the helm of the eye. This tattoo has a design of eight armed spikes pointing out from a center. This symbol represents protection and superpower. The eight prongs represent protection against evil intent. The eight arms are actually tridents, which is also a common symbol in Hinduism of Lord Shiva’s Trishul. This is an example of how there are many symbols shared by traditions all around the world.

The Valknut is one of the most fascinating Norse symbols. It consists of three triangles interlocking and pointing upwards. The name has two root words: “valr” meaning slain warrior, and “knut” meaning knot. Thus, Valknut is a knot of slain warrior. This symbol is associated with the god Odin, the Norsemen’s god of war and death. Nowadays the Valknut symbol is favored in jewelry design as well as and household design.

Yggdrasil is the mighty tree in Norse mythology. It is an eternal green ash tree which is also referred to as the tree of life. It has three different roots connecting three different worlds (Asgard, Midgard and Niflheim).

Mjolnir, or Thor’s hammer, is the weapon of Thor, the Norse god of thunder. Mjolnir is also understood as an ax that comes back like a boomerang. The hammer is associated with lightning, thunder, and storms. It symbolizes an amulet of battle and life. It provides power, courage, and generosity.

According to Norse mythology, Huginn and Muninn are a pair of ravens in service to Odin. They would fly away at dawn and return to Odin after the sun sets, giving him all the things they saw. They have certain wonderful powers and can even contact and speak to humans. They symbolize thought and memory. The presence of two ravens indicates the presence of Odin’s power.